Why do I feel so bloated after eating certain foods?

Carbohydrates, fats, and proteins can all be triggers of bloating. However, there are certain foods that may be worse than others and cause uncomfortable digestive issues like bloating.

Here is a list of a few of them. You don’t have to avoid these foods, just try eating one at a time and determine they cause bloating. If so, limit that particular food especially when combined with another that produced the same effect.

We are told to make sure we get enough fiber but some Fibrous foods such as whole grains, beans, and legumes can be a common cause of bloating. While these foods are promoted as healthier than their refined counterparts, their high-fiber content leads to bloat in some people.

Because our digestive system can’t break down insoluble fiber, the fiber enters the latter stages of our digestive system intact. There, probiotics eat it, and as that happens the fiber ferments as well as pulls water into our intestines. That fermentation—which occurs quickly despite sounding like something that takes months, not minutes or hours—creates gas. Oddly enough, it isn’t considered a bad thing when the cause of gas and bloating is fiber—instead, it’s considered a normal part of the process. That said, it certainly isn’t an experience most of us are comfortable with or want as a part of our days.

By now, you know that eating too much salt can cause a slew of long-term health problems, including high blood pressure. In the short term, an extra salty meal may lead to water retention, which causes bloating.

The American Heart Association (AHA) recommends that the daily sodium intake for all Americans should ideally be less than 1,500 mg per day, and no more than 2,300 mg daily.

Here are a few examples of meals and drinks and their sodium level.

So as you can see almost 1 of these meals and a drink reaches the “daily suggested sodium intake”.

What can you do to PREVENT and RELIEVE symptoms of Bloating?

Studies have proven significant benefits of probiotics in treating IBS symptoms, including reducing bloating. The regular use of probiotics promotes healthier, regular stool which could in turn help to reduce constipation and gas that can cause bloating.

You can avoid excess sodium in your diet by using flavorful herbs instead of salt, and by reducing the amount of processed and packaged foods you eat. 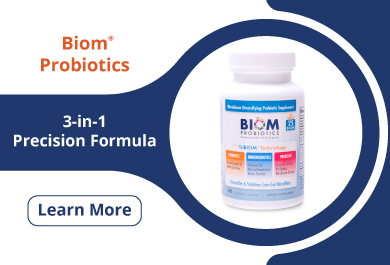 Biom’s high-strength microbiome supplement works especially well for those with demanding gastro-intestinal tract issues. Equipped with advanced probiotics and Biom’s 3-in-1 TriBiom technology, every capsule is comprised of a prebiotic, probiotic, and an immunobiotic. Each of which offers distinct advantages for the digestive tract.

Page load link
OUR USE OF COOKIES
To help you get the most out of the BIOM Probiotics website, to provide a safer experience and to improve our services, we use cookies. You are free to manage this via your browser setting at any time. Learn more in our Privacy Policy
Accept
Reject
Go to Top